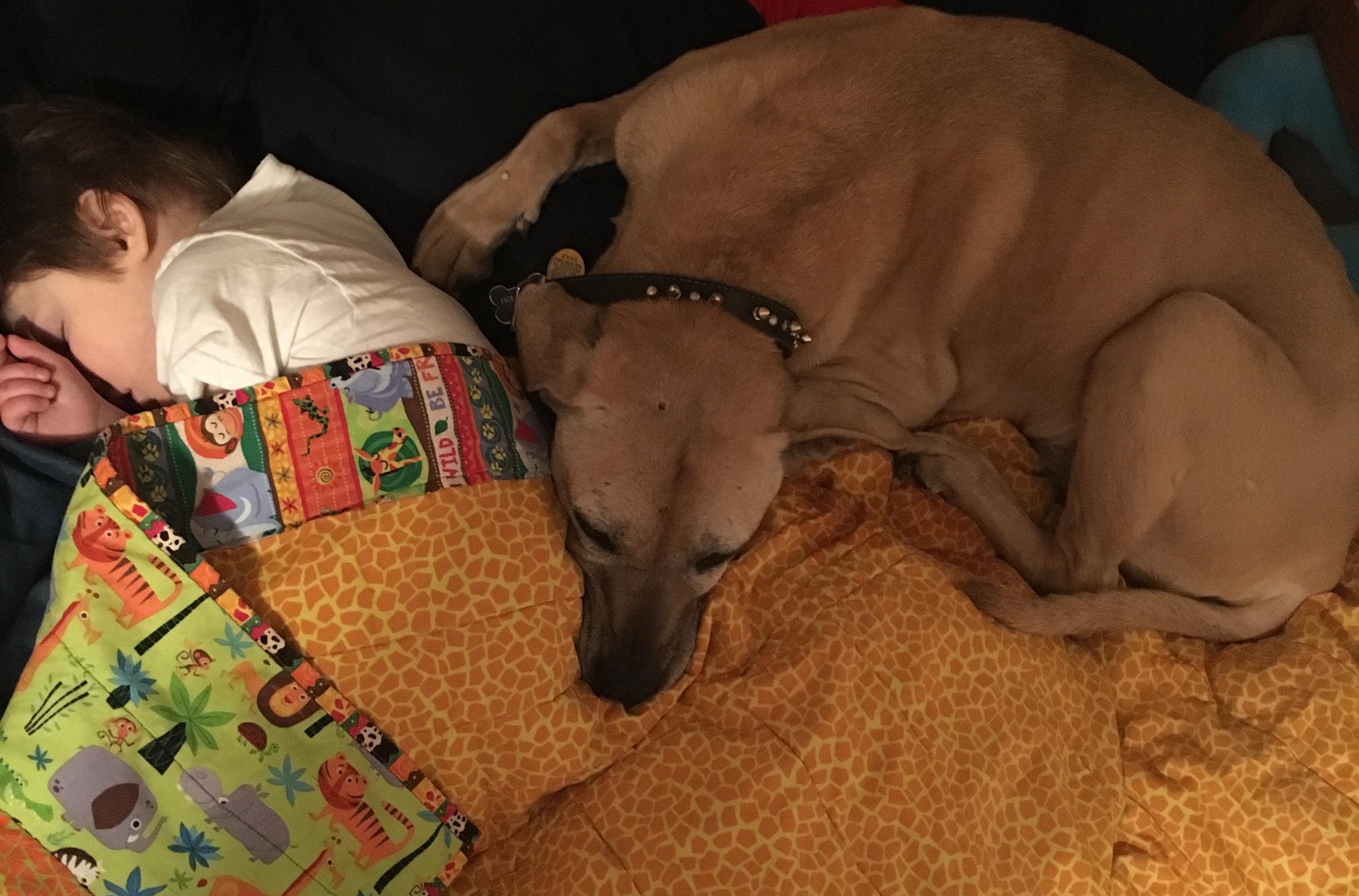 Something happened when we brought Bowen Dean “Bodie” home from the hospital in June of 2011. My old pit bull, Bud, who was about 10 at the time, formed an immediate canine attachment to our new little man. Bud had always been good with kids, even babies. He has the gentlest soul of any dog I’ve ever met. He was wonderfully patient with Ethan, Bodie’s big brother. Bud gently tolerated Ethan as he grabbed his fur, pulled his tail and ears and learned to crawl and walk. But there was something different between Bud and Bodie. Bud had to be by Bodie’s side all the time. If Bodie was in his bassinet, Bud was curled up under it. If you laid Bodie on the bed to change his diaper, Bud was right there. In his swing or Bumbo seat, you would find Bud nearby. We’d have to keep Bud from licking Bodie’s face or trying to put his paws on him.

Now, Bodie had been born with a heart defect called Tetrology of Fallot. It would require surgery to repair later down the road. Instead of a normal rhythmic heartbeat, Bodie’s heart made a swishing sound. Maybe that’s why Bud bonded with Bodie. Maybe he knew this kid had a special heart.

The day before Bodie’s six month birthday in December 2011, we took him in for heart surgery. It was to be a straightforward repair, requiring 1-2 weeks in the hospital then we would bring him home for a normal, happy, healthy life.

Things didn’t go well for Bodie. His first cardiac arrest was 3 days after surgery. The complications piled up. He was on ECMO life support. His liver and kidneys failed. He was clinging to life. When he seemed to make progress, there would be another setback. This wasn’t going to be a “normal” recovery. It was all up to brave little Bodie.

While Bodie was so critical in the hospital, we still had to take care of Ethan. I still had to go to work, but the hospital had become our home away from home. Poor Bud didn’t know what was going on. He just knew that Bodie wasn’t there anymore. Bud had always been a quiet dog, but now it was as if a light had gone out. We brought home Bodie’s blankets from the hospital for Bud to smell, but it seemed little comfort.

On Christmas Eve, Bodie was still in the hospital and had just been taken off the ventilator. My dad volunteered to spend the night at the hospital, so that my mom, Steph and I could stay home and have a normal Christmas morning for Ethan. At 2 in the morning, my Dad called. “Get up here”, he said. “What’s wrong?”, I asked. “Just get up here”.

Steph and I threw on our clothes and I ran every red light between our house and the hospital. Bodie had suffered another cardiac arrest. His room was in chaos. Doctors and nurses were working frantically to keep him alive. Every drawer on the crash cart was opened. Bodie was laying on the hospital table with a nurse doing chest compressions. With each compression, his little arms would jerk.

Bodie pulled through and he was finally stable. He endured over 30 minutes of CPR. Steph’s parents were there, and her sister and brother in law. We were told to go home, get some rest and let Ethan have a normal Christmas morning.

At about 5 am, we got home. We assured my mom, who had stayed home with Ethan, that Bodie was stable. Exhausted, we crawled back into bed though not really expecting sleep. It was then that old Bud did something he has never done before or since. He crawled up into bed, made his way up to my pillow and curled around my head resting his chin on the back of my neck. He let out a long sigh.

Something else happened that night. Something that neither Steph nor I, or none of the doctors or nurses would know for weeks to come. That night Bodie’s life changed forever. That night he suffered an anoxic brain injury from the cardiac arrest. He would no longer be able to hold his head up, sit up, smile or eat. He lost most of his eyesight. It would now be a question as to whether he would ever walk or talk. He will never have a normal life after that Christmas. But no one knew it at the time it happened. That is, except for maybe one old dog that was curled up around my head.

It would be five more long months before we could bring Bodie home from the hospital. And when we did, old Bud didn’t dance around or wiggle with joy. Bud, in his quiet demeanor, simply took his place at Bodie’s side where he belonged.

Bodie came home with a trach to help him breathe, a G-tube to help him eat, an amputated foot, plus he was on over 20 medications. We had home healthcare nurses arranged through our insurance and they soon learned that Bud was part of the deal. When they were helping us with Bodie, Bud was going to be there too. A couple of them started bringing Bud treats. We also had therapists coming 2-3 times a day. They would put Bodie through the paces, trying to maximize any chance for his recovery. Every session, on the corner of the therapy mat, there was Bud keeping an eye on things.

While Bodie no longer has the trach or G-tube or medications, he still has his nurses and therapies. Bodie spends much of his time in a special chair that supports his back and head. We call it his blue chair. Bud’s place is always near the blue chair. Bud will get up and lick Bodie’s face or lift his paw to touch Bodie’s shoulder. Bodie can’t do like normal kids and pull Bud’s ears or hug his neck or bury his face in Bud’s fur. But Bud doesn’t care. He’s just a good old dog. Some dogs you wish would live forever.